If you are a novice in the world of fish keeping, you may not immediately think about the invisible threats that may surround your fish. Perhaps you don’t even know what ammonia is.

However, if you intend to keep a fish, you must ensure they live in a healthy and safe environment. This includes ensuring that their fish tanks are always adequately kept and that they are not exposed to ammonia.

Your fish will live happily if you know this Complete Guide on How to Reduce Ammonia in Fish Tanks.

Here’s a rundown of everything you’ll learn in this guide to reducing ammonia:

NH3, often known as ammonia, is a colorless gas with a distinctive smell. This compound occurs naturally in the environment, and you can find it in the air, soil, water, plants, animals, and humans. When the human body breaks down protein-containing meals into amino acids and ammonia, the ammonia is converted into urea.

Ammonia is also naturally formed through the breakdown of organic matter, including plants, animals, and feces. It has been identified in space as well. Some plants, mostly legumes, fix atmospheric nitrogen to make ammonia in collaboration with rhizobia bacteria.

This compound is also a key nitrogen supply, which plants and animals require. It is vital for numerous biological activities, including the production of amino acids and nucleotides.

Ammonia is utilized in various industrial operations, as well as a fertilizer and a refrigerant. It is commercially manufactured through nitrogen and hydrogen catalytic reactions at high temperatures and pressures.

Approximately the New York State Department of Health stated that 80% of ammonia generated by the industry is utilized as fertilizer in agriculture to help sustain food production for billions of people worldwide. Ammonia-based chemical fertilizers include urea, ammonium phosphate, nitrate, and various nitrates.

As previously stated, ammonia is also utilized as a refrigerant gas. It is also used to purify water supplies and make textiles, plastics, explosives, dyes, insecticides, and other chemicals. You can find it in a variety of home and commercial cleaning products as well.

Ammonia is a byproduct of life in your fish tank. It is created through the biological waste from your fish and other aquatic life and the decomposition of formerly living things like fish food.

Excess ammonia can also create significant algae growth in your tank. That means your well-cultivated, well-kept tank will become green very soon. It can also impact pH levels, putting your tank out of balance.

The fish are one source of elevated ammonia levels in your fish tank. When a fish consumes food, the protein-building process might result in a byproduct entering its bloodstream. This causes ammonia to leak through their gills and into the aquarium.

Ammonia is also introduced into the aquarium by breaking down uneaten food, fish excrement, and plant materials. If you overfeed your fish, it can result in huge ammonia build-ups if left to accumulate.

Overstocking or introducing too many fish at once to a new aquarium that hasn’t gone through the nitrogen cycle can also raise ammonia levels that the tank isn’t prepared to handle.

Several water treatment businesses utilize chloramine (chlorine bound to ammonia) as a more stable disinfection for municipal water systems. Using this chemical-treated tap water in your aquarium is a formula for tragedy. And If you do not do regular aquarium care and cleaning, bacteria that feed on this waste may accumulate, leading to an ammonia byproduct.

In newly set up tanks, especially if the tank is just about one to twenty days old, high ammonia is caused by a lack of helpful microorganisms in the water. During this period, bacteria have little opportunity to establish themselves, causing ammonia and nitrite levels to become harmful to the fish living in the water.

These bacteria keep the water clean by converting ammonia and nitrite into harmless nitrogen molecules. They take a few weeks to establish themselves in sufficient numbers to keep up with the amount of waste produced by the fish.

How much Ammonia is Too Much

Because elevated ammonia cannot be seen, regular monitoring is required to ensure that it is not ignored. Frequent water testing can reveal unionized ammonia (NH3) levels long before it becomes the unseen fish killer.

And what is the permissible ammonia level in your mature tank? Zero. Your aquarium test kit reading for ammonia in a stocked tank should be 0 ppm (parts per million).

Ammonia toxicity varies depending on the organism, but one constant thing is that the optimal amount is as near zero as feasible. Marine species and fish are more sensitive, but fish that evolved to dwell in ponds or puddles, such as carp and paradise fish, are less sensitive.

If your ammonia levels are greater than zero, you must locate the source of the problem as soon as possible since the lives of your fish are at stake.

The total quantity of ammonia discovered in your tank, in both forms, is referred to as TAN. While TAN remains constant, the amounts of NH3 and NH+4 in your tank vary based on temperature and pH.

Although a basic ammonia test kit can only detect the total quantity of ammonia and ammonium in the aquarium, you should compare the data to a chart that correlates ammonia to pH levels. 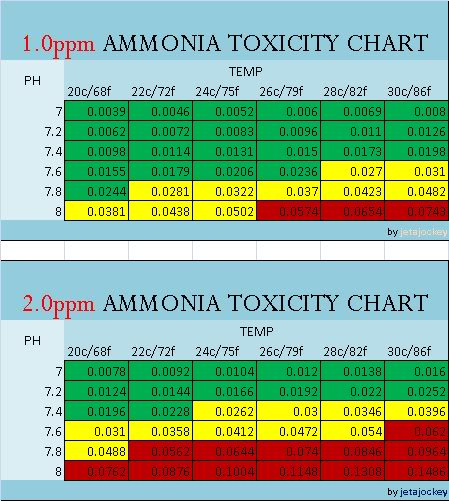 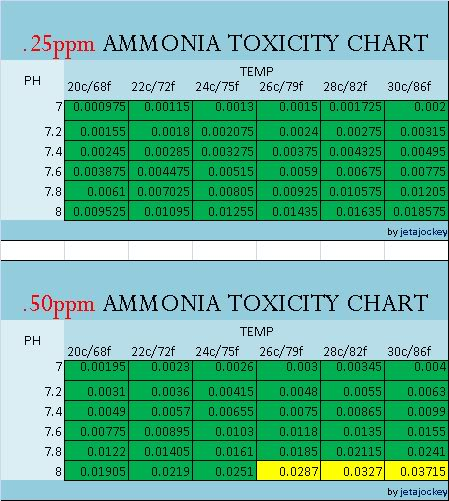 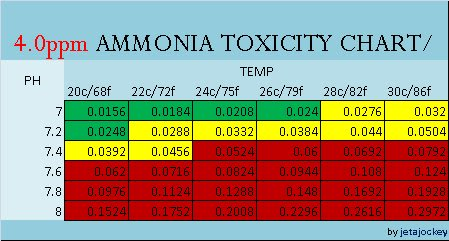 You should replace your water in the yellow or red zones. This can become problematic if your water supply contains ammonia, so test your tap water for ammonia to ensure your fish won’t be in danger.

Ammonia poisoning will eventually cause harm to a fish’s brain, organs, and central nervous system if it is not treated immediately. The fish will start to bleed both internally and externally. Then, it will ultimately perish.

Fortunately, you may avoid this by paying great attention to your fish since high ammonia levels are typically easy to spot, especially if you regularly keep an eye on your fish.

How to Check Ammonia Levels

Unfortunately, because ammonia is invisible, identifying excessive amounts can be challenging. And it’s frequently too late by the time you detect the consequences of ammonia poisoning on your tropical fish.

That is why it is critical to test your aquarium for ammonia regularly. And by far, the most popular method is to use an aquarium test kit.

The good news is that most pet stores sell this aquarium test kit. These kits measure the overall ammonia levels in your fish tank, including both ammonia and ammonium. Fill the test tube with aquarium water and a few drops of the testing solution, then shake. When the color changes, compare it to the color card. 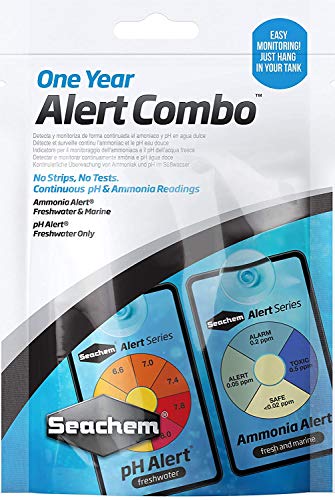 In an ideal condition, ammonia is not present in the water, even at the lowest quantity. Any steps, such as changing the water, must be proactive rather than reactive.

Best Ways to Reduce Ammonia in Your Fish Tank

Ammonia in a fish tank is directly tied to poor water conditions. High ammonia levels are more common in new or tiny tanks due to a lack of helpful microbes. Overcrowding in an aquarium also increases the likelihood of fish suffering from ammonia stress.

So, once you’ve finished testing the water in your fish tank and discovered that the ammonia level is too high, it’s time to take the following steps to lower it.

The following are some actions you may do to minimize ammonia in your fish tank:

By adding another cycled filter to your aquarium, the bacteria will consume the ammonia and return the levels to zero. However, locating a cycled gravel filter might be difficult if you do not have many tanks.

The good news is that you can substitute a sponge filter. It may be an excellent method to have a second cycled filter on hand when you need it the most. It will allow you to swiftly set up hospital tanks or utilize them in emergencies like an ammonia rise.

Reduce the Quantity of Fish Food

If your fish leaves a lot of uneaten food behind, that food might be the source of your tank’s high ammonia levels. Reduce the amount of food available in the tank to reduce the chances of ammonia levels rising.

Start with a deep water change method to eliminate ammonia from your tank without chemicals. Remove at least half of the liquid in your fish tank and replace it with clean, fresh water. Clean the tank’s walls with an aquarium scrubber and suction the substrate using a siphon.

Putting live plants in your tank will also assist. Plants not only take ammonia and carbon dioxide from the water but also create oxygen, which is required for existence. Furthermore, living plants provide a healthy, renewable food source for your fish.

Prevention is better than cure, they say. And preventing ammonia increase can be as simple as keeping each cause under check. Here are the things you can do to prevent ammonia increases:

Introduce Beneficial Microorganisms to the Water

Bacterial colonies that often line the bottom of a well-established fish tank aid in converting ammonia into its more benign nitrogen components. You can add good bacteria by transferring a handful of gravel from an older fish tank to the bottom of your new fish tank.

You may also try some people’s way of introducing bacteria by putting one or two cheap fish in the tank and allowing the fish’s excrement to bring in germs.

Check to See How Many Fish are in Your Aquarium

Overcrowding your fish tank might result in ammonia buildup. Too many fish-eating and pooping in a tiny tank can soon cause an ammonia surge. You should buy multiple fish tanks to minimize congestion to maintain more fish.

Clean the tank once a week to eliminate any dead plants or debris. Remove any biological materials that should not be present in your tank. Decaying organic debris contributes significantly to high ammonia levels. Every other week, perform a partial water change and, more often, in small, heavily-stocked tanks.

Once the ammonia level in your tank exceeds 1 PPM (parts per million) on a basic test kit, start treatment immediately.

If your fish appear to be suffering significantly, neutralize the ammonia with a chemical pH control solution. To turn it harmless, you can use a water conditioner in an ammonia emergency. The water conditioner allows your healthy microorganisms to catch up via binding the ammonia.

You should also limit feedings to minimize further waste. It would be best if you stopped feeding your fish for several days in situations of extremely high ammonia levels. You should avoid putting additional fish in the tank until the ammonia and nitrite levels have reached zero.

What should the ammonia level be in a fish tank?

Ammonia is very harmful to fish and other aquatic species. The only safe ammonia level is 0 parts per million (ppm). Even concentrations as low as 2 ppm will kill fish in your aquarium.

Is .25 ammonia harmful to fish?

Yes. While fish are not poisoned by .25 ammonia, they are still harmful.

How do I clear ammonia from my fish tank?

A partial water change is one of the simplest ways to eliminate ammonia from your fish tank. If you are using tap water, use a de-chlorinator and ensure the temperature is the same or within one degree of your aquarium water.

At this point, you should also stop feeding. If your fish are not eating, any food put in the tank will contribute to ammonia accumulation.

What is a safe level of ammonia in freshwater?

How to Reduce Ammonia in Fish Tanks Summary

Perform a partial water change to replace ammonia-filled water with ammonia-free water in fish tanks to minimize ammonia. Do it once a week or whenever you need to.

Include an extra cycled filter. If you don’t have one, you may substitute a sponge. The bacteria will devour the ammonia and return the levels to zero.

Finally, to minimize ammonia accumulation, decrease the amount of food you feed your fish. Ammonia levels might rise due to uneaten fish food.